An all-too-long 141 days after the NBA shut down on March 11—an event that first signaled to many Americans the dire seriousness of COVID-19—the league will restart its 2019-2020 season on Thursday, with a nationally televised doubleheader: the New Orleans Pelicans and Utah Jazz face off at 6:30 p.m. eastern, while the Los Angeles Lakers take on the Los Angeles Clippers at 9; both games will air on TNT.

At one point, fans, league officials and players might have imagined a resumed NBA season to be a sign that America has emerged from the worst of the novel coronavirus. Unfortunately, tip-off is no mark of public health improvement: July has seen a record surge of new daily cases of COVID-19; on July 28th alone, more than 60,000 new COVID-19 cases were reported in the U.S.

Back in March, no one would have thought that the NBA would resume, 141 days later, as things are getting worse. But here we are.

Tonight’s tipoff is a sober reminder of where America has been, and how far the country has to go to overcome COVID-19. At the same time, the idea of basketball as pleasurable distraction still holds, especially given yesterday’s welcome news: of the 344 players tested for COVID-19 in the NBA’s “Orlando bubble” since results were last announced on July 20, zero have returned positive tests.

It’s early. Players can do silly things, like visit an adult establishment to eat wings in Atlanta, to puncture the NBA’s safety bubble. But so far, the NBA’s safety protocols—no doubles ping pong, fellas—are working. And while coronavirus has taken one baseball team, the Miami Marlins, temporarily off the schedule, and while college football teams fight COVID-19 outbreaks, we can, for now, watch basketball with a clear conscience. Players in Orlando haven’t suffered dangerous health consequences while trying to entertain us.

So there’s plenty to look forward to with basketball resuming. Such as:

The most intriguing aspect of the “seeding games”—the eight contests all 22 teams will play to determine which teams make the playoffs, and where they fall on the bracket —is the chase for the the last spot in the Western Conference playoffs. By dint of their record at the NBA stoppage, the Memphis Grizzlies currently own that slot, with three teams—the Portland Trail Blazers, New Orleans Pelicans, and Sacramento Kings—3.5 games behind Memphis in the standings, the San Antonio Spurs 4 games behind, and the Phoenix Suns trailing by 6 with just those 8 games to play. (After the seeding games, if the team with the eighth-best record in the conference is four games or fewer ahead of the team with the ninth-best record, there will be a “play-in” series, in which the ninth seed must beat the eighth seed in two straight games to make the postseason).

The entire basketball universe, is seems, is pulling for the Pelicans and lusting after a potential first round matchup between New Orleans, featuring rim-shattering rookie Zion Williamson, and the Los Angeles Lakers, the current top seed in the West, who have LeBron James and Anthony Davis, an ex-New Orleans star. That would indeed be great. But Memphis making the playoffs shouldn’t be seen as a mere consolation prize: rookie point guard Ja Morant is the real deal, who runs the team with expertise far beyond his years. 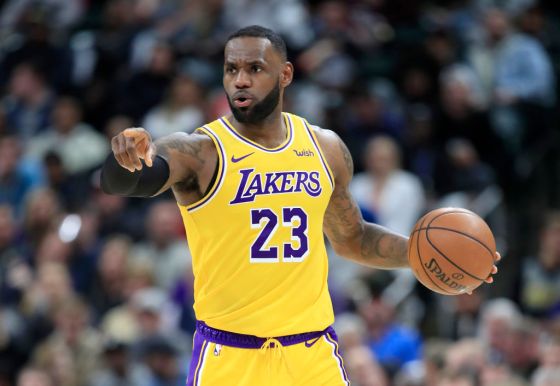 Given the total upending of the planet in these past 141 days, forgive yourself if you forgot that, in his 17th NBA season and at age 35, LeBron James is still very much on top of his game; he leads the the NBA, for example, in assists per game, at 10.6. If he holds on, he’ll become the second-oldest player to ever win the assist title—Steve Nash won one when he was 37—and just the sixth NBA player, besides James Harden, Russell Westbrook, Jerry West, Tiny Archibald, and Oscar Roberston—with both a scoring and assist title to his name (James led the NBA in points per game back in 2007-2008, with 30). The man’s been in his prime for almost two decades.

Leading a third NBA team to a championship, like he’s already done with the Miami Heat and Cleveland Cavaliers, would just enhance his case in the G.O.A.T. (Greatest Of All Time) debate that’s not going away any time soon. During the stoppage, Michael Jordan got to make his case on the screen, via the wildly popular documentary The Last Dance. LeBron now gets his chance on the court.

Though star sixth-man Lou Williams will have to sit out the beginning of the season as he quarantines following his hankering for some wings in Atlanta, L.A.’s other team, the Clippers, still have a strong shot to win the franchise’s first-ever title. Kawhi Leonard and Paul George front a roster loaded with talent. Los Angeles had the second-best record in the West before the shutdown, and they were never fully healthy; George, for example, missed 22 games. Will we see a fully-loaded Clippers squad in Orlando?

In typical times, the Lakers and Clippers share a home at the Staples Center, which could have led to an unusual occurrence: if the teams met, say, in the Western Conference finals, would there be a real home court advantage? Would Lakers fans buy up all the tickets for Clippers “home games?”

Now, with no fans in the stands and all games playing on a campus at Walt Disney World, home court is just a mirage.

Which, for fans, could enhance the competition. Home teams, sparked by the excitement of screaming fans, can often put games away with a stellar run. Without such rushes, will these neutral site games be closer? During a best-of-seven playoff series, a change of scenery often crushes momentum: an underdog can win a Game 4 at home to even a series or cut into a deficit, and then promptly fall in Game 5 on the road, worsening their chances for victory. With no home court, the playing field could be leveled. Might we see more Game 7s than ever?

On the flip side, home court advantage works both ways in the playoffs: the home fans can propel the less talented team to a win or two. Without it, do the inferior teams even have a chance? Might we see more sweeps? This is just another element of a fascinating sports experiment.

The Milwaukee Bucks enter the bubble with the NBA’s best record, at 53-12. Their best player, Giannis Antetokounmp (a.k.a. “The Greek Freak”) is likely to win a second-straight MVP award on the strength of his 29.9 points, 13.7 rebounds, and 5.8 assists per game—not to mention his efficiency, as he’s shooting 55% from the field. LeBron James and Stephen Curry are the other two players to have won back-to-back MVPs in the past decade; Antetokounmpo is 25. He’ll likely keep improving his three-point shooting, so we probably haven’t even seen the best of the Freak.

The Bucks, however, have underwhelmed in recent postseasons. They finished with the best record in the Eastern Conference a year ago, before the Toronto Raptors bounced them out of the conference finals in six games. Antetokounmpo will be a free agent next summer. For Milwaukee, anything less than the team’s first NBA Finals appearance since 1974, when Kareem Abdul-Jabbar manned the middle, feels like a failure.

The 2020 Finals will take place in October, alongside the baseball playoffs. This NBA restart is unlikely to be perfect. But it’s bound to be something no sports fan will ever forget.